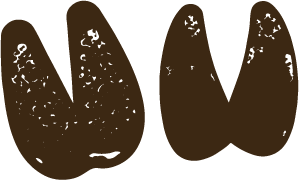 Hamish and Andy have won the hearts and minds of all they have met.

Touched by a donkey, or two. Meet Hamish and Andy! Hold your heart strings everybody – two miniature donkeys have just trotted into Edgar’s Mission. And taken over! Quite literally taken over!!

You’ll see them here; you’ll see them there – as Hamish and Andy never cease to touch and colour our lives every single day and we could not be more delighted.

And, judging by some of their hilarious antics, neither could they!

Hamish and Andy have won the hearts and minds of all they have met.

Aptly named Hamish and Andy after the hit Australian comedy duo of Hamish Blake and Andy Lee, the pranks of these diminutive farmyard comedians are a riot! From secretively moving bowls and buckets then standing back to watch the mayhem ensue, to sneaking up and eavesdropping on many a conversation with those radar-like ears. Right from the get-go, their comic intent was palpable, as the Lady in the Hat and one-time champion equestrian relates. “Easy task”, she mused at the prospect of loading two miniature donkeys and returning to the sanctuary. After all, the Lady in the Hat has dealt with the giants of the equine world, from clever Clydesdales, whopping Warmbloods, and feisty Thoroughbreds, right down to cheeky and wilful ponies.

So, two miniature donkeys? “Piece of cake,” she tossed back her head and uttered.

And then she met Hamish and Andy, who showed not an ounce of respect for the Lady in the Hat’s horse savvy. “I caught them easily enough” she related, “and they both walked up to the float without a hint of hesitation, even curiously sniffing it and showing no signs of fear or dread. But walk on?”

“No way, José!” was the unequivocally unanimous response from the donkeys, whose tiny hooves had miraculously become cemented to the ground on which they stood.

After employing all the clever tactics she could think of to load and bribe the obstinate donkeys, there was but one still to try. One never before resorted to. But one that necessity now dictated.

And so, one by one, the Lady in the Hat lifted each unprotesting donkey into their awaiting chariot as they nonchalantly took in the scenery along the way; then happily they stood munching away, looking forward to their next adventure.

The Lady in the Hat slunk tiredly into the car. Donkeys 2, Pam 0. But, truth be told, few can witness those long ears and mournful faces of donkeys and not be touched. And there is good reason for this. The bonds between humans and donkeys are keen and strong, both touching the heart of the other. So much so that research has shown our beating hearts can synchronise with each other. And with donkeys being so chilled, just like our affable two, their calming moods can morph into our own.

And if you are ever touched by a donkey, you will surely know this too!

It is no wonder that this dynamic duo have now been declared permanent fixtures of Edgar’s Mission, bringing joy and laughter to the hearts of all they meet.