The heartbreaking reality of how one devastated pig copes with the death of his friend. Wilbur’s experience may evoke a similar journey endured by many of us, and thus acts as a reminder that humans are not the only species who feel such sorrow.

Fern, the human protagonist in EB White’s classic novel, “Charlotte’s Web”, was one of only two beings who recognised that Wilbur was indeed some pig and very much deserved to live. It is through her unbridled innocence that she finds a window into her axe-wielding father’s heart and persuades him that Wilbur, the runty piglet, should live.

With so many important lessons coming from this tale, it is hardly surprising that it remains ever popular and much-loved today. Which is rather telling, as this is exactly the affinity one holds for pigs once one truly gets to know them.

Having both the courage and compassion to stand up for the meek and recognising the importance of being a true friend are some of Fern’s poignant messages. So too we learn that the most meaningful and profound of relationships can spring forth in the most unlikely of places and species. Such simple messages find their way into our conscience and remind us that every life, from that of a clever spider, a humble pig, or a human seeking to right an injustice, is impacted by the experiences and kindnesses encountered along the path of one’s life journey.

And it was the rescue of a humble pig who revived this classic tale for us recently. Naming her “Fern”, she touched us like no other, but alas for her, she had no wonderous spider above her spinning words in her web to make people realise what a terrific, humble and radiant pig she really was. In fact, all dear Fern had was a barren and pungent yard, her solitary thoughts, the body of her departed buddy and the little ray of hope that came when the call was made to Edgar’s Mission.

On hearing of her plight, we knew we had but one thing to do, and that was to be her “Charlotte” and redeem her life as best we could. But it was to be no mean feat, as we came to learn that some weeks earlier efforts to relocate Fern and her buddy caused the two great distress, with the death of Fern’s lifelong friend the very next day. And so, with all of the pig-savvy skills, compassion and taste-tempting treats we could muster, we set off to save the lone and forlorn Fern.

What we unearthed on arrival almost broke our hearts, and it had Fern’s. For it was not physical pain that had become Fern, but the extreme sadness of losing her friend that now possessed her. Most “unpig”-like was Fern as she refused all offers of food to lure her away from the single piece of tin sheeting that had been her and her buddy’s crude makeshift shelter – a shelter that, given its feeble construction, had little chance of ever fulfilling its charter of protection against the elements. And when we did manage to coax Fern but a few steps, she would retreat to another barren (save the little patch she had dedicated to her toilet area) and dust-filled corner, slump to the ground and stare blankly in front of her as if we were not even there. And in that instant, we saw grief in its purest of forms, for Fern had retreated to a place within herself we could not penetrate. Our greatest hope was that, with the passage of time and kindness, we could.

With her world now darkened by the passing of her friend, life appeared to have little meaning or purpose for Fern. And whilst bringing her back to sanctuary was not the joyous occasion we wanted it to have been, and we knew the road ahead would be long, we trusted we could find a path forward for Fern to learn to live and maybe, just maybe, love again. But first we had to heal a broken heart.

Animal advocates have long been cautioned not to anthropomorphise about animals expressing emotions or experiencing states akin to many of our own; however, noted primatologist and author, Frans de Waal, argues otherwise, citing it is often a useful tool in understanding what animals are experiencing or going through. In fact, it is now more the case that the skeptics are giving way to accepting that rich emotional worlds are held by animals, and that states such as fear, joy, happiness, shame, embarrassment, resentment, jealousy, rage, anger, love, pleasure, compassion, respect, relief, disgust, sadness, despair and grief are not monopolised by the human species. Emotions in animals serve the same purposes as they do for we humans – helping one navigate their way through their world. Noted animal behaviourist, Marc Bekoff, lends his scientific and ethical muscle here, stating that “emotions permit animals to behave adaptively and flexibly”.1

Depression is described as a “persistently depressed mood or loss of interest in activities, causing significant impairment in daily life” (Mercy.net). It is often characterised by an increased or decreased appetite, withdrawal from normal daily activities and an increased amount of time spent in bed.

Mirroring such an often-described human state, which is rarely attributed to animals, was Fern and there can be little doubt she was driven there by the sudden and traumatic passing of her friend, which she had struggled to accept. We make sense of Fern’s behaviour by drawing on our own lived experiences of loss and grief that comes with the passing of a much-loved and cherished friend and also witnessing or enduring traumatic events.

But how were we to tell Fern things would be different here and that something better lay ahead, knowing that despite all the kindnesses, soft golden-straw beds and delicious taste-tempting food we could offer, we could never bring back or replace the one thing she wanted most – her much-loved friend? Only time would tell.

And as the days turned into weeks, slowly Fern did begin to emerge from her self-imposed cocoon and shelter to sniff the morning air, and her porcine innate curiosity returned, sending her further afield in her new home, and hopes began to rise. But alas, such emergences from this well of sadness were all too brief; once again she would be consumed by it and we would find her lying listlessly on her straw bed, with that same blank stare having taken over her sweet and whiskered-filled face, and again we did not exist.

However, with the passage of time, the periods of such solitude became less and less, and Fern’s interest in the world began bright, fresh and anew and were sustained for longer and longer. Fern was turning her life (and our hearts) around, and it was good. And then we knew it was time. Time to introduce Fern to another of her kind – for social animals, whether pigs or people, a life of solitude is rarely very good. And whilst we knew her new buddy would never fill that trotter print in her heart left by her dear friend of long ago, it was someone with whom she could share her world, her straw bed and maybe, just maybe, provide the glue to help heal her broken heart too.

In coming to know Fern as we have, there is little doubt in our mind that she assigned meaning and value to the life of her friend, in much the same way we do our friends and loved ones, and that she too mourned her passing in much the same way we do. But what we value most is that the Fern we see today before us is a different, happier pig from the one who almost broke our hearts when we first met, and this too informs us that in love, loss, and grief we are not alone. And now, thanks to a pig named Pigcasso, neither is Fern. When his wriggly little tail felt the sharp teeth of a predator, kindness brought him to safety. A mischievous yet endearing little mite who arrived with a broken leg.

A wee little lamb who is doing all the right things. 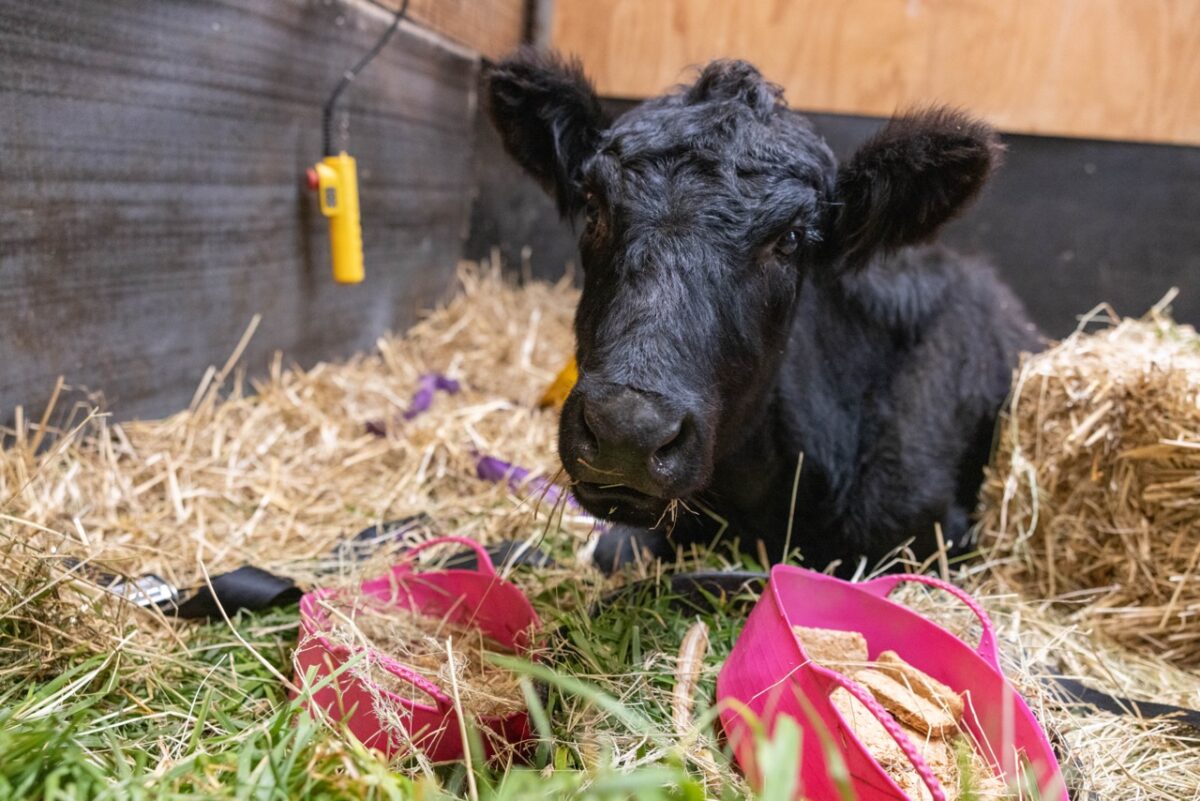 A reminder that sometimes miracles come out of nowhere. On a bitter winter’s night, a cavalcade of kindness was formed to save a newborn lamb. Amethyst, a precious gem and a lesson in empathy. Surviving for years in the Australian bush carrying 26kg (57lbs) of wool. The tiny chap who fortuitously and unwittingly exchanged the hand in life he had been dealt. They say that lightning never strikes twice. Thankfully kindness does! Meet the cheeky little orphaned lamb who has monopolised our hearts.